The scientific community's response to the Corona virus is heartening. We also have excellent resources such as ocw, wikipedia etc. Can we build an “open wisdom” system on top of existing resources and emerging patterns of rapid scientific collaboration? 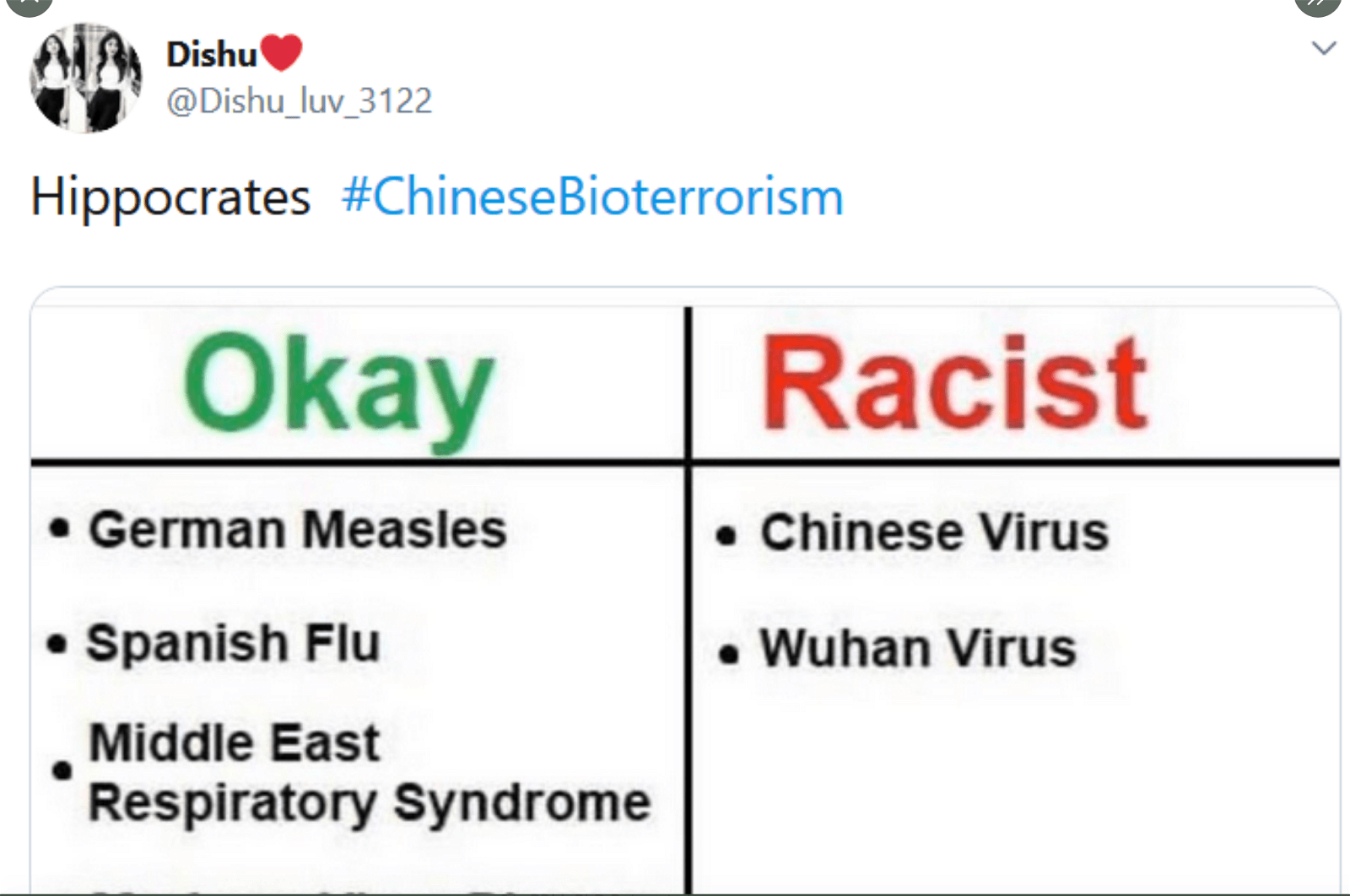 Among the various pieces of depressing news I heard last week is the extent of the disinformation campaign during the COVID19 outbreak. By now we should be used to right-wing forces aligning to spread misinformation. The epidemic is no exception.

Notice the delicious irony - Hypocrite turned into Hippocrates in a hate tweet about a medical emergency.

Like many other such trends, Trump was on top of the misinformation campaign, calling it the "Chinese Virus," a meme that spread (virally?) across the right-wing twittersphere. Having had their day with Muslims earlier this year, the desi right wing also turned towards China.

Then there’s the straightforward production of falsehood. It turns out that India is a big (biggest?) source of fake videos about the viral outbreak. We were doing quite well at producing fake political news when the viral outbreak gave us an opportunity to expand our repertoire. Once lying becomes a habit of thought in one sphere, it’s only a matter of time before it generalizes to other spheres, especially if the lies are trusted and that trust is monetizable.

As I have written elsewhere, the capture of emotion - both by Surveillance Capital and the Surveillance State - is one of the most important developments of the last thirty years. Trust is an emotion; sometimes keenly felt and sometimes sublimated into institutions and transactions that operate in the background. Is it any wonder that the commoditization of trust is of interest to surveillance capital/state?

Our need for trustworthy institutions is heightened during a crisis, just when we are worried that the system is breaking down. One lesson we have learned in the last two hundred years is that capitalism left to itself will extract profit where it can and destabilize everything else in its wake. The market cannot be the only institution running our lives. We need other institutions that balance out the power of the market. That's true in every sphere that markets colonize - it was true for work when assembly line work prompted the creation of labor unions and it needs to be true of emotional labor (what else is a like or a retweet or a forward?). In other words, we need institutions that guarantee trust and skills that help us design trustworthy institutions across the varieties of work and play.

Such institutions already exist - the media and the state are primarily institutions of trust aren't they? Newspapers want to be seen as telling the truth and informing us about the everyday course of the epidemic. Just as I was writing this essay, I saw this ad at the bottom of a George Monbiot article I happened to be reading when my focus flagged.

Governments also get it. Elections broker power, but they also broker trust. In a crisis, governments signal trust by showing us they are responding appropriately: imposing lockdowns, passing giant stimulus bills, racing to manufacture ventilators and so on. While important, these are sporadic efforts tied to a specific context.

I don't think these existing institutions are enough, especially in a world that's going to face new challenges of a planetary nature. We need to be able to spin up trustworthy institutions at a moments notice - could be a nationwide drought, another pandemic or, on the positive side, new uses of AI for creating prosperity. These challenges should spur a systematic effort to design trustworthy artifacts and institutions, similar to how human centered design (HCD) became a thing when computing devices spread from the world of geeks to the everyday consumer.

Because trust is the glue of life.

Like good design, it stays in the background and makes the world ‘work’. That’s why I don’t think twice about handing you a dollar for a cup of coffee and you don’t think about accepting it - trust that the monetary system is guaranteed by central banks is one reason why we have nation states. It’s only when the system breaks down that you notice the innards of our trust-making mechanisms.

We are in one of those breakdown situations, where our streets and stores have been emptied because we don’t trust what happens when we come in proximity with others. Even our friends and neighbors. Like any number of other human institutions, trust is grounded in visceral human interactions - shaking hands, giving hugs, etc - all of which are now restricted if not banned. I won't be surprised if these restrictions impact our perception of trust. We don’t know how long this enforced isolation will last, but there’s a good chance some behaviors are going to change forever.

COVID 19 is only the first of many upcoming disruptions; climate change will bring a host of new ones; automation and AI will have their impact and there are always Martians to worry about. We need systems that can rapidly adapt to emergent disruptions. Knowledge of those disruptions will have to be gathered and disseminated in real time. Expertise from a wide range of disciplines will have to be curated, meshed and deployed with speed and scale. Trust is a matter of both facts and values - we need to trust that the world is being represented as it is and those representations are in the service of human and planetary flourishing. In other words, an accurate representation of both material and moral complexity. Further, such systems will have to be public and universal by design, not tied to national, racial or ethnic boundaries.

I believe if we trace back to its roots, we will eventually hit one of three bedrocks:

Why these three and not others? Why not God? Perhaps I should qualify my claims as saying: the three primary sources of trust in this world.

#2, Power, is more opaque to me than the other two so I am not going to talk about it. As a parent, I have a visceral connection to the first but I don't know how it translates into public institutions. So that leaves the third where I have a direct stake as a scholar. I will end this essay with some thoughts on designing trusted systems of knowledge.

Contestation over knowledge are endemic in the global village, whether companies fighting over patents or scientists who claim priority. Sometimes that contestation veers into outright denial - the well funded campaign against the reality of climate change being the best known. On other occasions the facts are accepted but their origins are questioned. The insistent claims that the Corona virus was created in a Chinese lab are good example.

Of course, some of the viral conspiracies are true: Stuxnet was created in a lab.

These contestations erode trust in knowledge. Scientists don't help their case when many influential studies can't be replicated. To be honest, I am not surprised - to the extent knowledge is a commodity, it too will suffer from boom and bust cycles like copper or real estate.

That's bad news for trust in knowledge is essential in a world of uncertainties. We don't know what the future holds, but we can sleep easy if we know there are good systems for mapping and tracing new developments. If those systems don't work and the world stays turbulent, how can we believe in a stable life?

Which is to say we need to fix the knowledge trust deficit urgently.

The scientific community's response to the Corona virus is quite heartening. We also have excellent resources that can serve as seeds for a knowledge commons: open courseware, wikipedia etc. Can we build an “open wisdom” system on top of these existing trustworthy resources and emerging patterns of rapid scientific collaboration?

A draft picture of what open wisdom might look like is given in the above figure as a way of starting a conversation. Fleshing that picture out will require forays into technology platforms, behavior change, cognitive science, wisdom design...